Choosing to get a Marth figure was an easy decision for me for two reasons. First, I’ve played several games in the Fire Emblem series in the last decade and as frustratingly difficult as they can be at times, I just going coming back. My most recent completion was Fire Emblem Fates: Conquest, and the combination of challenging gameplay and an engaging plot again reminded me of why this is my favorite tactical RPG series. However, I haven’t actually played either of the Fire Emblem games that include Marth (the original and the remake), so why did I choose him?

The answer lies in another hobby of mine that took over my life between 2007 and 2014. I played Super Smash Bros. Melee for GameCube competitively during this time and Marth was the character that I played as my “main” throughout most of that 7 years. So I figured I’d kill two birds with one stone by having this Marth figure represent my love for both Fire Emblem and SSBM. 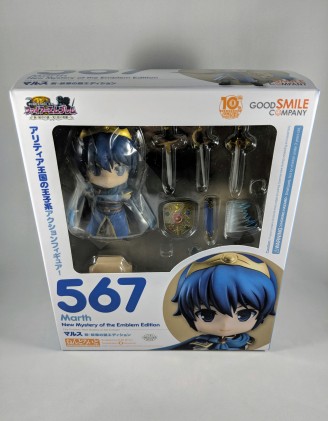 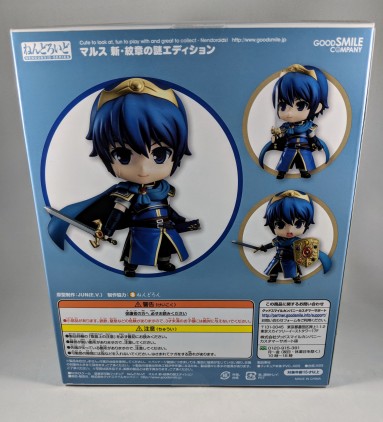 This Marth figure is also special to me because it’s my first Nendoroid from the Good Smile Company. When I decided to begin collecting figures from my favorite games and anime, I considered many options but I knew that I wanted the same theme/style for all of my figures. Nendoroids were the logical choice for me for three reasons. First, they are small without sacrificing detail, which means that they don’t require too much space, something that can be hard to find in my downtown apartment. Second, the price point is just right; Nendoroids are not so cheap that quality is compromised, but also not so prohibitively expensive that it’s difficult to build a collection. Third, and most importantly, Nendoroids are just so darn cute! The design is great and with a decent camera, you can really make the figures come to life and look like they came straight from the screen.

However, with my first experience with Nendoroids came with some struggles that had nothing to do with the product itself. Many of the pieces are quite small and at first, I was afraid to apply too much force when switching out some of the parts. My fingers are also not particularly nimble so it was difficult at first to align everything correctly for the poses and attach Marth to the stand properly. Thank goodness for the stand though; I don’t know how I would have balanced the figure for photos if there were no stand. Fortunately, the stand is fairly discreet in that the part that props up the figure (bottom left in picture above) is clear and relatively easy to hide behind the figure in photos.

This Marth Nendoroid comes with 2 faces, 4 pairs of hands, 3 swords (including an attachable “slashing” part), a shield, a scabbard, and a stand. In addition, Marth’s cape can be removed and his belt can be rotated. He is a fully articulated Nendoroid, with joints at his elbows, knees, shoulders, and ankles, which is impressive for such a small figure. Once I learned to trust the quality of the pieces and realized that I wouldn’t break them with my clumsy hands, I had no issues with the most of the pieces.

However, the biggest annoyance was definitely the scabbard, which was attached to the belt. This attachment was not the tightest, and especially with the shield and cape taking up the same space, it was often easy for the scabbard to fall off the belt. Another minor issue was it was difficult to find the right hands to hold each sword tightly at certain angles, as the hilts of the swords were different shapes.

But enough criticism, this is a great Nendoroid. I got a lot of good poses in and thoroughly enjoyed the whole process of switching the parts around while taking pictures of the figure. Enjoy! 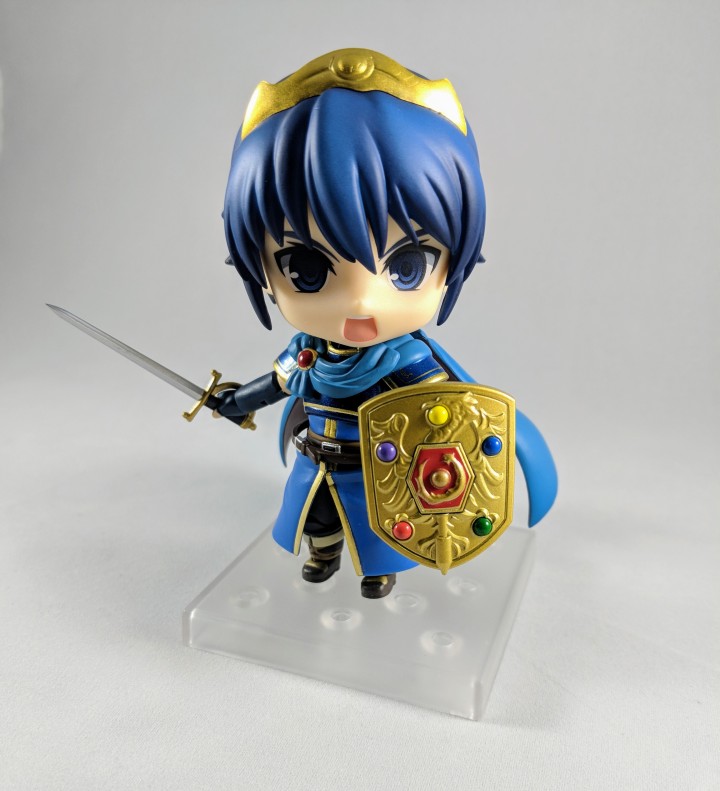 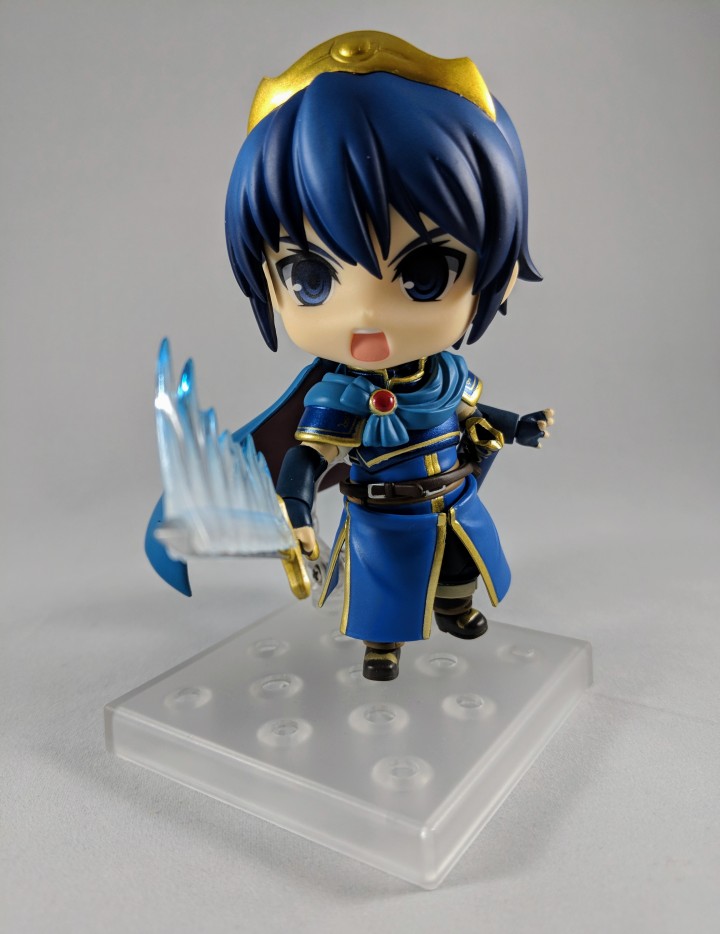 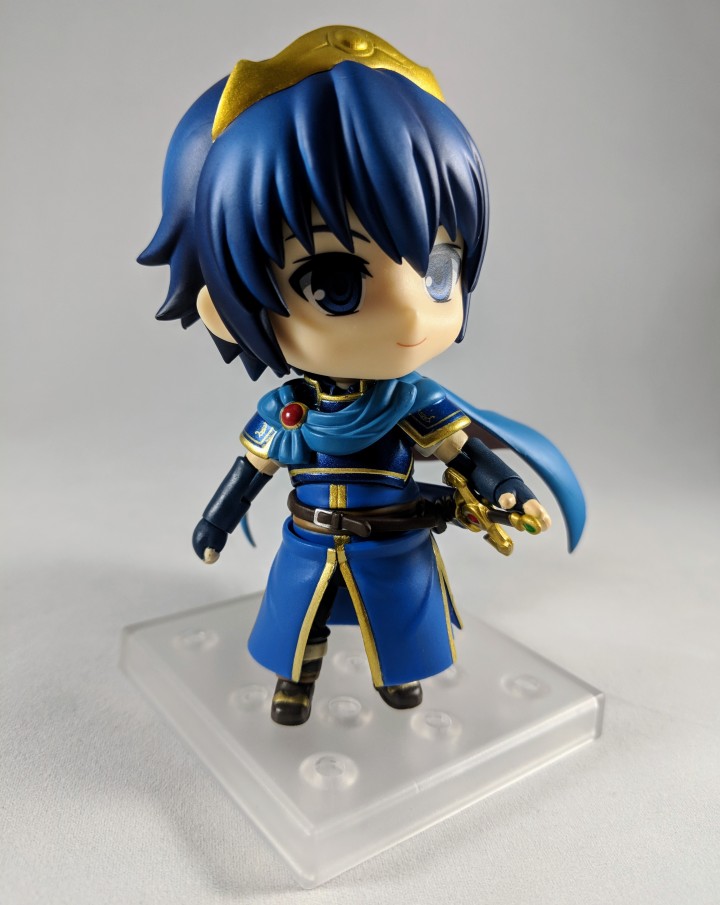 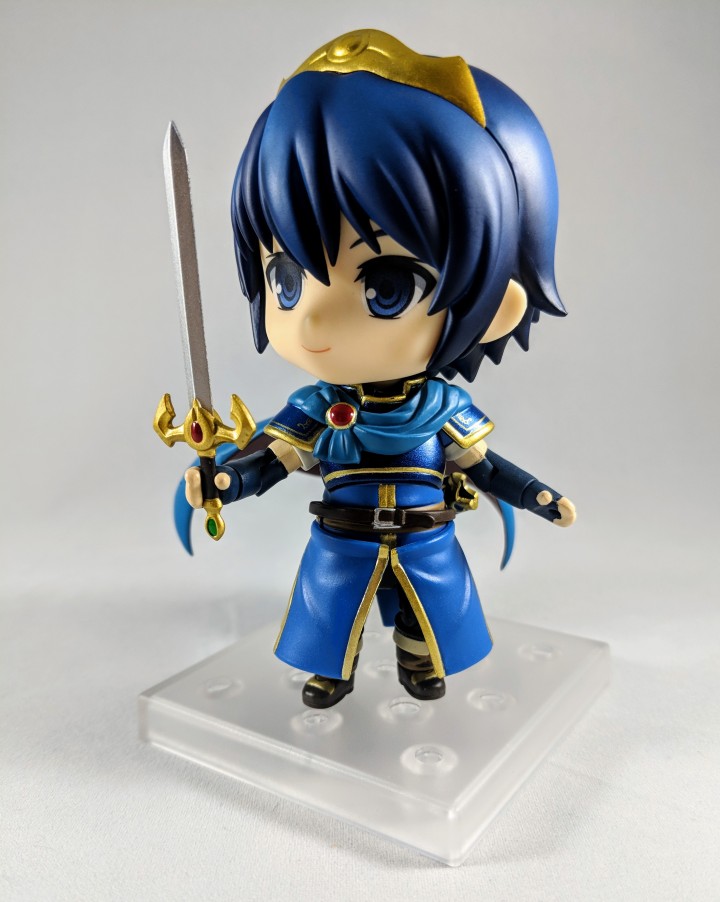 Overall, I’m pretty happy with my first Nendoroid purchase and this Marth figure felt like it had the right balance between having a variety of poses and not being overly complex. However, I do have a slight concern in that I’m not 100% certain of its authenticity. I bought it on eBay for just under $40, which is definitely on the low end of authentic Nendoroids (the obviously fake ones from China are usually under $20), but it was shipped from Japan. The box says “Made in China” but a little research told me that it’s not uncommon for Good Smile figures to be produced in China despite it being a Japanese company. I’m not going to worry too much about it until I get my next few Nendoroids. I’ve seen collectors say that the difference between a real and fake is clear when you have both in front of you, so hopefully I’ll be able to verify this figure in the upcoming weeks!